By continuing to browse the site, you are agreeing to our use of cookies : Find out more.

Report on the diagnostic survey of the Network for Integrity

Report on the diagnostic survey of the Network for Integrity

In the second semester of 2017, a diagnostic survey was conducted among member institutions of the Network for Integrity. Thirteen members out of fourteen took part in this exercise. Composed of 171 questions, the survey covered various subjects, ranging from annual budgets to events calendars, and thus enabled the development of comprehensive, harmonized profiles of each participating institution. These profiles shed light on both the diversity and the unity of the Network: despite national specificities, its members share common interests, values and expectations.

The present report analyzes the main results of the survey, draws comparisons between member institutions and identifies collective trends. Its aim is to outline an overall picture of the Network for Integrity, as it stands now, and to provide a basis for further discussions. In particular, this report intends to help shaping the new strategic plan that will guide future activities of the Network. The findings of the diagnostic survey are divided into five thematic parts: 1) institutional landscapes; 2) legal frameworks; 3) civil service systems and ethical rules; 4) enforcement mechanisms and transparency; 5) educational initiatives and cooperation practices.

By asking members about their structures, their missions, and the means at their disposal, the survey mapped the institutional landscapes of the Network. Firstly, it can be noticed that all member institutions were created after 2000 and therefore are relatively young. Indeed, the global debate on public integrity, transparency and ethics gained momentum in recent years. In this context, many countries in different continents created institutions entrusted with missions related to these issues.

Moreover, the survey indicated that the number of staff varies significantly across organisms: just under a third of members (31 percent) employ between 100 and 299 agents, whereas the same percentage of institutions has less than 50 staff (see Figure 1). Concerning the prerogatives institutions have to fulfill their missions (see Figure 2), most of them (11 out of 13) answered that they rely on cooperation with judicial authorities. This result can be understood in the light of the fact that all member institutions, as stipulated in Article 4 of the Charter of Network for Integrity, have a non-judicial status. For this reason, cooperation with competent judicial authorities is essential. Besides, the survey showed that a little more than half of the total number of respondents possess monitoring and research tools. The development of such tools could be further encouraged. 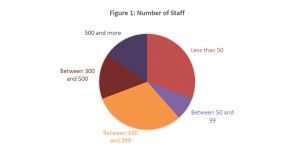 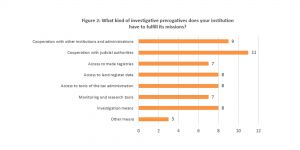 All members of the Network confirmed that their respective states have ratified the United Nations Convention against Corruption, the only legally binding universal anti-corruption instrument. Consequently, all member institutions share the values and norms laid out in this convention. On the other hand, five countries out of thirteen (approximately 38 percent) have not ratified or acceded to the OECD Convention on Combating Bribery of Foreign Public Officials in International Business Transactions. Still, all countries have joined other anti-corruption conventions or initiatives.

Regarding national legislation, every respondent’s country has established regulation on the integrity of public officials. Overall, public officials are held responsible for the way they perform their duties. In addition, they are subject to obligations related to transparency, such as disclosure requirements (see Figure 3). Disclosure of assets and income is consistently required in all surveyed countries. Conversely, disclosure of interests, gifts and other benefits is relatively less widespread. 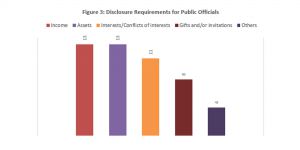 All member institutions said that their countries have specialized anticorruption authorities: almost 70 percent of these authorities are financially and administratively independent. Domestic active or passive bribery constitutes a criminal offence in every national law. However, bribery of a foreign public official is not a criminal offence in three surveyed states (23 percent). In most countries (10 out of 13), there are no laws, regulations or powers to deny entry to foreign officials charged with or convicted of corruption. Finally, a majority of countries (12 out of 13) have procedures and tools on whistleblowing: almost 77 percent of them have legislation to protect whistleblowers in the public sector, but only 38 percent have equivalent legal provisions for the private sector.

The survey explored civil service systems and investigated the ethical rules that govern the conduct of civil servants in distinct countries. Even though all surveyed states have a civil career service, in over half of them the civil career service does not apply to all employees of public administration. As a matter of fact, the recruitment of contract agents is not uncommon. Procedures to enter the civil service are made public in many states (more than 60 percent), transparency is hence promoted. In 92 percent of countries, there are schools or programs dedicated to the training of civil servants. It can be noted that tailored education and training favor the emergence of civil service cultures, with their own codes and customs. Since one of the main goals of the Network is to foster a culture of integrity, the ethics curriculum of programs targeting civil servants, where they already exist, and the creation of new programs, where needed, could be discussed between member institutions.

Furthermore, ethical rules and standards are applicable to civil servants in order to ensure public integrity. All respondents affirmed that their countries define, prevent and sanction conflicts of interest. Nevertheless, the collection and verification of declarations of interests is not systematic. In some countries (31 percent), verification procedures are still lacking (see Figure 4). Likewise, not all countries have restrictions for appointment of relatives into public positions (see Figure 5, only 62 percent of surveyed countries have these restrictions) or with regard to post-public employment (30 percent of institutions indicated that their countries do not have “revolving door” regulations). 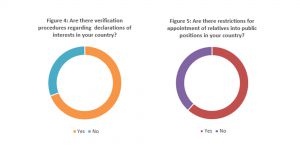 The scope of asset disclosure systems also differs across countries and member institutions. Some systems require that all public officials disclose their assets, whereas others chose to focus on senior and elected public officials (see Figure 6). 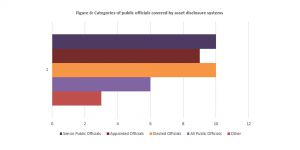 Most institutions (12 out of 13) make the content of asset declarations public. A majority of asset disclosure systems (85 percent) also include a verification function. All respondents certified that penalties are imposed in case of non-compliance with asset disclosure obligations. Accordingly, members of the Network could share their good practices in these matters. Indeed, it would be valuable to exchange views on how institutions publish and verify asset declarations, and on how they tackle non-compliance. These practical insights and concrete lessons would benefit all members by helping them to streamline their own asset disclosure systems.

The ethical rules abovementioned are enforced by a number of mechanisms. The misconduct of civil servants is subject to different kinds of sanctions and disciplinary actions (see Figure 7). 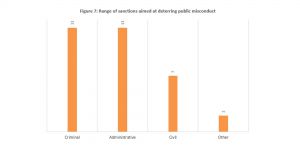 Sanctions are useful instruments to deter misconduct. Nonetheless, the mere existence of sanctions is not enough to ensure public integrity. The survey revealed that the enforcement of ethical rules is marked by a lack of available information and transparency. Only 23 percent of member institutions attested that their countries have indicators and/or statistics to measure integrity breaches. Monitoring tools could be further developed to enable citizens to scrutinize public officials’ misconduct and thus to strengthen public accountability. Moreover, immunities can potentially hinder the implementation of enforcement mechanisms, and yet they are guaranteed for certain public officials by most national laws (in 11 countries out of 13).

Education plays a salient role in the fight against corruption: 85 percent of respondents indicated that national institutions in their country provide training to public officials on corruption prevention and/or teach them about integrity issues (see Figure 8). Business associations and civil society organizations also carry out anti-corruption training activities in most surveyed states (almost 70 percent). Furthermore, 62 percent of respondents stated that institutions from their countries are involved in at least one international anti-corruption educational initiative (see Figure 9). 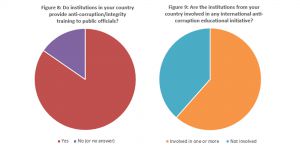 Cooperation practices are well established in most countries: 92 percent of respondents said that their domestic authorities cooperate and share information with integrity services of international organizations. Besides, the Network for Integrity can be considered as an international cooperation framework. Member institutions expect that the Network will increase their visibility, enable them to share information and experiences, and help them to reinforce their institutional capacities by offering trainings and enhancing mutual learning. In this perspective, the organization of conferences, seminars, working groups and trainings, as a well as the preparation of guidelines, studies and articles, are endorsed.

The Network for Integrity is seen as an opportunity to exchange knowledge on corruption prevention measures and methods. Three main subjects were put forward as priorities for future activities of the Network:

The present report showed that the diagnostic survey of the Network for Integrity constitutes a useful tool to get a detailed picture of its member institutions and to plan their next steps. The survey revealed that monitoring and research tools could be further developed, especially in regard to measuring integrity breaches of public officials. Moreover, it showed that, despite institutional differences and contrasting national contexts, all members of the Network believe in the benefits of sharing knowledge and experience. Therefore, mutual learning and cooperation can be viewed as the bedrock of the Network.

To conclude, it can be highlighted that the survey conveyed members’ expectations. Member institutions expect that future activities of the Network will deal with ethics in the public sector, asset declaration systems and data management. As a result, these subjects will need to be addressed in the forthcoming strategic plan and the following events of the Network.